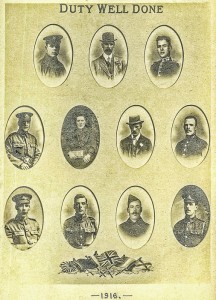 Janet Asher of Derwent Avenue, Milford sent some fascinating photos of her grandparents – the Watsons – who lived in Milford.  Her great grandfather Samuel Watson and his wife (pictured 2nd row down, photos 2 & 3 across) had all 9 of their sons serving in the Great War.

If there is any information you can add about any of the photos below, please contact the webmaster

You can click on any of the photos to see them bigger.

Tim Sanders of Milford has kindly sent in some information about this photo of Maurice Watson:

‘Maurice was in the 2nd Battalion Grenadier Guards and enlisted between January 1913 and January 1914 meaning he went over with the first draft of British men in 1914. He was a regular soldier.

The 15 year old Maurice is on the 1911 census (see below) living at 56 Hopping Hill working as an apprentice engineer at the cotton mill.

Incidentally, after 1st Ypres in November 1914, he was one of only 140 to remain (out of 1,000 men in August), the battalion suffering particularly badly in the opening months of the war.

Note the jokey words ‘Officer’s Servant’ etched on the tin

Nurse gathered together in Belper

The War Memorial just after completion

Jack Watson, Janet Asher’s grandfather, is on the back row, second left. But who are the other men gathered together at The New Inn?

A family snapshot on Hopping Hill. Some faces are blurred as they didn’t stand still enough! Note the smoke issuing from the mill chimney

Family portrait in the allotment

An essential guide to village services and amenities - everything from schools to churches, bus times to businesses, pubs to public footpaths, MPs' surgeries to doctors' surgeries. click here >

Milford was a quiet hamlet until Jedidiah Strutt set up a water powered cotton mill and built housing for the workforce. Discover more about our rich heritage here. click here >

A guide to organisations and interest and activity groups in the village and beyond - from Maypole Promotions to Blooming Milford, Derbyshire Archery Club to Knit Knatter. click here >